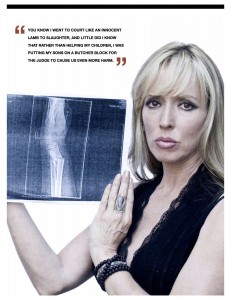 During the past 18 months, Tara’s two sons have reportedly suffered five broken bones requiring 11 casts. They have gotten approximately 35 stitches. These boys have been taken to the emergency room and doctor’s offices at least 48 times to treat injuries that all occurred while in their father’s care since his custody time with them was increased by the court. At least ten calls or reports were filed with Child Protective Services (CPS) out of concern for the boys’ safety by doctors, teachers, school counselors and psychiatrists during this time period.

CPS and the courts apparently dismissed the shocking number of injuries to the boys with the stated excuse that “boys will be boys.” Tara reports that CPS told her that her phone calls to them and the reports made by others were “more harmful to her sons than anything they’ve gone through with their father.” CPS also reportedly told her that they viewed the abuse reports as “part of a custody battle,” and that if she had a problem with her custody schedule, she should go back to court. They reportedly blamed Tara for maintaining conflict with the boys’ father.

Tara’s and her children’s trouble intensified when she went to court requesting a permanent restraining order against her ex-husband because he was openly stalking them. The judge denied the request. Later, after being advised to return to court because of the boys’ ongoing pattern of injury in her ex-husband’s care, she was reportedly told by an attorney that she had “too much evidence” and that it would “probably annoy the judge.” Tara submitted 15 exhibits of hard evidence that were apparently ignored by the judge. The court mediator failed to contact the children’s pediatrician on time and was forced to submit a “supplemental recommendation,” which the judge announced she would not consider. Supervised visits for the boys’ father were not imposed, as the doctor had recommended.

The boys reportedly continue to beg and plead with their mother, teachers, police officer, school counselors and psychiatrists to spend less time at their father’s house, where they report being yelled at, threatened, isolated for long periods of time and physically endangered. In August 2008, CPS accompanied the police to investigate a report by the father’s therapist that he was in possession of dynamite, which his girlfriend had found in his bedroom drawer. Dynamite was also found in a truck that the children were often transported in. Tara learned of this incident from the boys, who were reportedly very scared as they watched their father hand over a bag of explosives to the police. The children reportedly fear that there could be more explosives. The boys have also asked that they not be forced to go on dangerous ”vacations” with their father, but the court orders allow these trips to continue.

This summer, Tara reported that her sons’ father took them camping in an active wildfire evacuation zone, despite one boy’s longtime asthma condition and both boys’ reported requests to be taken home. These incidents have been reported to numerous authorities involved in this case, yet no one has stepped in to protect Tara’s children. She wants her sons to have a safe relationship with their father, since she knows how much they love him, but supervised visits for the father have not been ordered. Tara’s now on the verge of losing her home due to the costs associated with her family court nightmare. She has been advised by numerous attorneys not to return to court as a means of protecting her children, or she might risk losing more or all custody of her kids. Her custody arrangement is now 50/50 and she fears that stepping back into the Marin Family Court will only diminish her time with her boys and put them even further into harm’s way. She finds herself “living in a constant state of prayer, with no viable way to stop the continuous physical endangerment and abuse of her own children.”

Alabama police, with the help of DNA technology, … END_OF_DOCUMENT_TOKEN_TO_BE_REPLACED

(Murfreesboro, TN) We now have more details about … END_OF_DOCUMENT_TOKEN_TO_BE_REPLACED