You are here: Home / Advocacy: Our Sweet Spot / Policy & Legislation

In March 2022, Kayden’s Law was signed into law by President Biden. The Keeping Children Safe From Family Violence Act or “Kayden’s Law” in VAWA financially incentivizes states to prioritize child safety and restrict court-ordered reunification threat therapy in family law, along with other key child safety provisions and ensure that their child custody laws adequately protect at-risk children by:

In December 2019, Representative Brian Fitzpatrick came to the Center with a specific ask – help him create a federal Kayden’s Law. We are not only grateful to Rep. Brian Fitzpatrick for his leadership, but also to our pro bono lobbyists at Pillsbury Law, former Representative Greg Laughlin and Craig Saperstein, for their stellar lobbying work on this crucial bill, U.S. Senators Feinstein, Durbin, Ernst & Murkowski, retired California Judge Eugene Hyman, Protective Father Darrel Riley, the National Family Violence Law Center and others that helped get this across the finish line! Thanks also to our ally Angelina Jolie, who never wavered in her advocacy for Kayden’s Law. Protective Mom Kathy Sherlock’s courageous advocacy ensures that her precious daughter Kayden will never be forgotten. We deeply value our work with Kathy since 2018.

The full text of VAWA can be found at www.congress.gov/bill/117th-congress/house-bill/2471/text

Senate Bill (SB) 654, backed by Angelina Jolie and Dylan Farrow, would require a judge to consider a parent’s history of domestic violence and substance abuse before allowing unsupervised visits with children.

SACRAMENTO, CA — Senator Dave Min (D-Irvine) announced today his bill to create and extend protections for children in family court advanced from the State Legislature and will head to Governor Newsom’s desk for his signature. SB 654 passed the Senate Floor with unanimous support.

SB 654 would require judges to make findings on the record when entering an order for unsupervised visitation with a parent who has a history of domestic violence or substance abuse. This bill would also ensure children who wish to testify in contested custody battles do not have to do so in the presence of the parties seeking custody, unless it is deemed necessary by a judge.

“I am grateful to my colleagues for their overwhelming support of SB 654, which will save lives,” Min said. “Child safety must be our number one priority in the courts, and we must ensure that we don’t put children in situations of ongoing danger of domestic violence or substance abuse. I am proud that this measure brings us one step closer to guaranteeing our laws better protect children and prioritize their health, safety, and welfare.”

This bill has enjoyed prominent and widespread bipartisan support. It is sponsored by the Legislative Coalition to Prevent Child Abuse.

According to Melissa Knight-Fine, Director of this organization, “SB 654 promotes risk assessment and consideration of information from law enforcement and other child protection agencies, proven tools to help prevent abuse. The bill will protect children in high-risk cases where parents who have been on supervised visitation due to violence now are asking for unsupervised visits.”

In her letter of support, Jolie wrote, “Having courts make findings on the record will ensure that histories of domestic violence or substance abuse are addressed and treated, and such findings will protect children from unsupervised visitation when unsupervised parenting is unsafe. The modest measures in SB 654 are also expected to prevent the need for additional hearings due to unsafe visitation.” Dylan Farrow, a prominent advocate for survivors of sexual abuse. also encouraged public support for “this crucial legislation.”

The Center for Judicial Excellence has advocated for fifteen years for the safety of California
children whose parents are going through separation and divorce in our state’s family courts and CJE strongly supports Senate Bill 654. CJE previously served as the lead sponsor of then-Assemblywoman Fiona Ma’s 2010 Assembly Bill 1050, which Gov. Arnold Schwarzenegger signed into law (Fam. Code Section 3042). AB 1050 first gave children 14 and older the right to speak directly with a family court judge.

Dave was a University of California Irvine law professor and a former economic policy staffer in the United States Senate and for the Center for American Progress. He began his legal career at the Securities and Exchange Commission to protect the retirement security of seniors, turning down high paying jobs to serve the public interest. Dave and his wife Jane live and work in Irvine, where they are raising their three young children.

June 2021 ~ AB 1577 Commission on Judicial Performance Unanimously Passes in the Assembly, Then Passed and Funded as Urgency Measure via CA Budget Bill

The Assembly Judiciary Committee unanimously approved California AB 1577, that was then included into AB 143, which was passed and funded in the budget bill as an urgency measure. As a result of the bill’s successful passage, a 15-member Committee to Review the Operations & Structure of the Commission on Judicial Performance will be formed to provide a substantial opportunity to implement the State Auditor’s 2019 report recommendations and reform the largest court system in the United States by creating an entirely new culture of judicial accountability in California that does not currently exist.

In 2020, the Center for Judicial Excellence was able to increase the number of public member seats on this 15-member committee, securing seven seats for members of the public to participate. CJE also led the 3-year legislative effort to complete the first official state audit of the CJP in its then-56-year history which will serve as the roadmap for this newly formed Committee’s work. The scathing report by the state auditor found that the California Commission on Judicial Performance (CJP) had missed numerous opportunities to fully and impartially investigate claims of judicial wrongdoing. The Committee to Review the Operations & Structure of the Commission on Judicial Performance will be tasked with review and consideration of how to best implement the state auditor’s recommendations, including holding at least two public hearings, and a requirement to file a report with state leaders and the public by March 2023.

The ability to create lasting and meaningful change for California’s nearly 2,000 judges will be determined by the individuals appointed to serve on this Committee. The Center for Judicial Excellence strongly believes that this committee could bring together the state’s smartest, most dedicated advocates for family law reform, criminal justice reform, probate/conservatorship reform and juvenile justice reform in the shared mission to protect the public from judicial misconduct and maintain public confidence in the integrity and independence of the judicial system.

Listen to the recording of the first public meeting, held on Apr. 19, 2022 here.

The 85-page report from the California State Auditor details how serious ongoing judicial misconduct has fallen through the cracks at the California Commission on Judicial Performance (CJP). The report affirms what we have recognized for years, and it provides a detailed roadmap toward increased accountability for California’s judicial branch. In order for change to happen, we now need leadership from brave legislators willing to push through a Constitutional Amendment to meaningfully reform the CJP and better protect the public from harm. 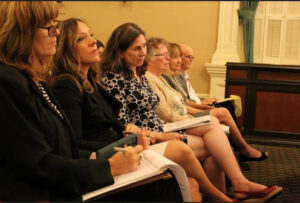 The Center for Judicial Excellence looks forward to working with lawmakers, our court reform allies and other stakeholders to better protect the public from the ongoing judicial misconduct that tragically destroys people’s lives in the Golden State on a daily basis. The first step is always to identify the crisis, which this investigation has so powerfully done. Now we can go about fixing it.

Thanks to everyone who played a role in this important milestone in judicial accountability reform.

Visual summary of the report recommendations

Summary of the report

In August 2016, the California Legislature’s Joint Legislative Audit Committee (JLAC) ordered the first-ever audit of the California Commission on Judicial Performance (CJP), the state’s only judicial oversight agency, due to a growing public outcry that the agency was not fulfilling its mission to protect the public from unethical judges. The CJP responded to the Legislature’s move two months later by suing the California State Auditor in an attempt to delay and thwart the first-ever audit of the agency in nearly 60 years.

For two years, the CJP lawsuit effectively stopped the State Auditor in her tracks, keeping her from doing the critical oversight work that the Legislature asked her to do to determine whether the CJP is effectively safeguarding the public from unethical judges. The Center for Judicial Excellence led the successful statewide lobbying effort to convince the JLAC to audit the CJP in August 2016, and we also led the effort in the Spring of 2018 to get the State Senate and Assembly to pass a $500K budget cut for the CJP that – while it was omitted from the Governor’s final budget – sent an important message to the CJP that they best cooperate, or the Legislature might yank their purse strings in the future.

OTTAWA - Judges will have to undergo regular … END_OF_DOCUMENT_TOKEN_TO_BE_REPLACED

Garfield Park in South Pasadena used to be a place … END_OF_DOCUMENT_TOKEN_TO_BE_REPLACED

[Calif.] The Committee to Review the Operations … END_OF_DOCUMENT_TOKEN_TO_BE_REPLACED