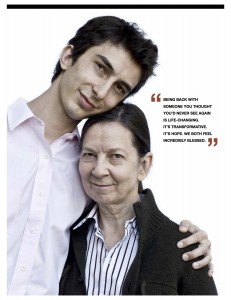 Roz and her husband were married for two years before they filed for divorce, when their son Christian was one. During a visit with his father when he was three, Christian apparently suffered genital trauma. His mother took him to Children’s Hospital to assess his injuries, and doctors were extremely suspicious that it was non- accidental genital trauma. A highly respected child abuse expert and doctor at Children’s Hospital was so concerned about the injury that he tried to get the District Attorney to prosecute, but law enforcement refused to take action. The family court ordered an evaluation, but the evaluator refused to evaluate Christian, and the sexual abuse evidence was trivialized as part of a “custody dispute.” Realizing that the authorities would not protect her son, Roz decided to take Christian underground. After 18 months, she was apprehended in Vermont for child abduction, and she was put in jail for five days. The Vermont court released the case back to California under the condition that the case be placed in San Diego Juvenile Court.

The San Diego court ordered that the father be given custody of Christian, despite another medical finding of suspected sexual abuse by Children’s Hospital. The social worker in the case knowingly left things out of her report and deleted documents from his file. She advised placing Christian back with his father during the trial since she was convinced that the abuse charges against the father were false. To prove it, the social worker made a surprise visit and took Christian and his father to the hospital for a medical checkup to examine for abuse – and the doctors found anal trauma consistent with sexual abuse. The father refused to allow doctors to take a culture, which might have definitively proven abuse, furthering suspicions. In spite of all of this, the social worker deliberately broke the law mandating that she cross-report these findings to law enforcement. Throughout the trial, Roz said that the theme became “isolate and minimize” when it came to evidence of abuse. When the social worker later took Christian back for another checkup and he didn’t show signs of trauma, the court concluded that there must never have been any abuse and that the previous findings must have been due to another cause, such as his father’s suggestion that he was being wiped too hard in the bathroom.

When a juvenile court judge assigned to their case spoke in support of reviewing the medical evidence to determine whether or not her son had been abused, and when a Child Protective Services (CPS) worker suggested that the mother get unsupervised visits with her son, they were both immediately dropped from the case. Many people came forward in court and openly admitted that Christian’s father had ritually abused them as well. These victims provided verifiable information to substantiate their allegations, but none of it seemed to matter to the court. Roz just assumed that her ex-husband had good connections, and that somebody was helping him avoid prosecution.

When Christian was six, he disclosed in a therapy session that “bad people tied him up.” The therapist contacted CPS about it and was told that if they got any more reports of abuse, they would “throw them in the trash.” Shortly after this, Christian’s father moved with him to Arizona without the permission of the court. Though it would seem that the case should have been handled in the same way it was when Roz took Christian to Vermont, CPS (who had not been actively involved with the case for some time) sent letters to the judge strongly discouraging him from allowing Roz to have custody of her son – advice which the court followed.

Roz left things alone for a period, which she thinks was one of the best things she did. Eventually, she called and Christian answered the phone. She asked if he might want to begin some visits and he did, so they visited for about six months. When Christian was 14, he decided that he wanted to live with his mother. Ironically, since the wishes of the child constitute a primary factor in Arizona’s family court custody determinations, which Roz thinks was a key factor in her ex’s decision to move him there, Christian was finally in a position to determine his own fate.

Roz has cried a lifetime of tears over this case, and she believes that it is an absolute miracle to have Christian back. Recently, Christian began dealing with the truth of his past, stating that his Dad brainwashed him to believe that his Mom was a kook and a liar. He said that he does not really think his Dad wanted to get him back because he loved him, but instead it was just a battle his father wanted to win. Christian said that his Dad is very good at lying and deceiving. “It really damages a person, it really messes your life up. No one should have to go through this.”

A seven-year-old boy has died after being … END_OF_DOCUMENT_TOKEN_TO_BE_REPLACED

Alabama police, with the help of DNA technology, … END_OF_DOCUMENT_TOKEN_TO_BE_REPLACED

(Murfreesboro, TN) We now have more details about … END_OF_DOCUMENT_TOKEN_TO_BE_REPLACED