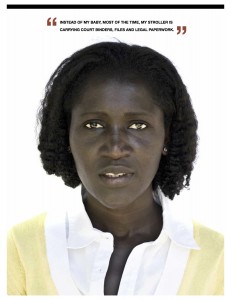 Rama is an unemployed immigrant from Senegal who is fighting to keep custody of her three-year-old son. The boy’s multi-millionaire father is Caucasian, in his mid-sixties and works as a nude art model. Rama reported experiencing domestic violence and sexual coercion from the boy’s father when they lived together. He did not want Rama to have the child and refused to acknowledge the child as his own after the boy was born. He locked mother and child out of his home and then called the police to file an admittedly false domestic violence complaint against her so that she and the boy would be removed from the residence.

The boy’s father has a history of erratic behavior and has a mental illness that requires him to take medication and interferes with his parenting abilities. Court orders were issued that prohibited the boy’s father from taking his son into risky situations or on overnight visits.

After a multi-day trial regarding Rama‘s request to move with her son to New York, where she had a job, a home and a school scholarship waiting, the judge issued a custody order stating that if Rama remained in Marin County, she would retain custody of her son and the father would have no overnight visits until his medical condition stabilized. The same order provided that if Rama moved, the father would immediately have full custody of the child.

Rama remains trapped in Marin County – one of the most expensive places to live in the nation – living in a rented room with no job, no permanent home, no family, no car, no affordable child care, insufficient child support and a court that is inexorably moving towards giving custody of the child to the wealthy father – a man who never wanted the child in the first place.

A seven-year-old boy has died after being … END_OF_DOCUMENT_TOKEN_TO_BE_REPLACED

Alabama police, with the help of DNA technology, … END_OF_DOCUMENT_TOKEN_TO_BE_REPLACED

(Murfreesboro, TN) We now have more details about … END_OF_DOCUMENT_TOKEN_TO_BE_REPLACED