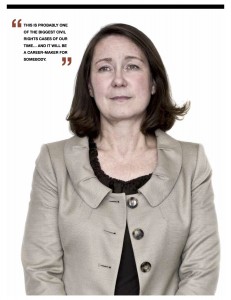 Paula endured 15 years of brutal abuse at the hands of her husband. The beatings intensified when she got pregnant and he tried to force an abortion. Paula said that her husband hated that he could not control her body or her love for her child, and he reportedly threatened to “make her daughter disappear.”

She went to a women’s shelter and was referred to an attorney who advised her that her husband would get unsupervised visits if they got divorced and it would cost her everything she had. So she decided to go back to him to protect her daughter. But as she became increasingly fearful for her life, she decided to have a second child so that they could have each other in case she was no longer there.

After her second daughter was born, the police intervened in many domestic violence calls, but her husband continually received Probation Before Judgment rather than jail time. As long as he attended anger management classes, her husband could apparently abuse her freely and not be in violation of his probation.

Paula’s ex-husband often called her on the phone while he was abusing their daughters and he made her listen as they were screaming in the background. Paula often called the police to help, but they would typically tell her that they do not come over if it’s a “custody matter.”

Once they were in divorce court, Paula discovered that she was barred from bringing any new criminal charges against him for domestic violence. “It is not legal, but it happens all the time,” Paula said. Criminal domestic violence cases can be vacated by a family court judge if the judge requests that the case be transferred, or if the judge joins it with a civil divorce case so it is never heard.

The judge eventually found that her ex-husband was abusing her, and that he was abusing the children as well. The psychologist found this to be true and the children’s appointed attorney agreed. But while the judge conceded that the father had abused his children, the judge also stated that Paula had not returned the children to him after he had abused them, as the court had required her to do, so the judge reportedly stated “they’re even.” Of course Paula had been told by social services that if she returned the children to her ex after knowing that he had abused them, she would be prosecuted. This exemplifies the double bind that many parents face in the family court crisis- they are damned if they do report abuse (and they are accused of fabricating allegations to gain a custody edge while being labeled alienators), and yet they are threatened with arrest for not protecting their children if they remain silent about their children’s abuse.

Paula’s ex-husband got custody of their two daughters. Remarried and living in a different state, he was eventually arrested for abusing his new wife. As for Paula’s children, the oldest is angry at Paula for not being able to protect them, and her youngest experiences terrible guilt after watching her sister suffer the brunt of the abuse. At this point, Paula trys to stay a little bit numb.“It’s not one case. There are many cases. No one case will give you the full picture. Many, many, many judges would be implicated by this. Once they realize that they’re backed into a corner, suddenly there’s silence. They just don’t answer. It’s all about covering their tracks.”

A seven-year-old boy has died after being … END_OF_DOCUMENT_TOKEN_TO_BE_REPLACED

Alabama police, with the help of DNA technology, … END_OF_DOCUMENT_TOKEN_TO_BE_REPLACED

(Murfreesboro, TN) We now have more details about … END_OF_DOCUMENT_TOKEN_TO_BE_REPLACED