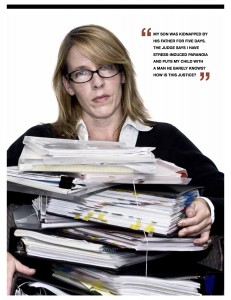 Kimberley never married her son’s father, who started out as her neighbor and friend in an artist’s loft in Los Angeles. They became artistic partners, and she accidentally got pregnant with his child. Shortly thereafter, he began to mistreat her, so she decided to leave L.A. when she was seven months pregnant. He followed her after she moved to Mammoth, California. She tried to make it work for nearly a year since he was the father of her newborn, but she never felt supported by him. He would stay out until 2AM and force her to walk to work in deep snow with her baby strapped to her because he needed their only vehicle. Kimberley eventually decided to return with her baby to the East Coast, where she was originally from. Her ex agreed to drive her but became hostile, blew up and abandoned her at a gas station in Nebraska, forcing her to drive across the country by herself. She kept in phone contact with him for a few years and asked for child support a few times, but he threatened to haul her back to California for a court fight, so she stopped asking. During most of those early years, he would come to Virginia for a few visits with his son but always returned to California.

Kimberley received a phone call one day that the boy’s father was moving to Virginia. He began having short visits with his son, which Kimberley approved of, since she had always told her ex that a child should have two parents. Over time, her ex would return the boy to Kimberley’s house early, before she was home and sit with him in the car in the driveway. Kimberley eventually allowed her ex to wait with their son in her house before she got home. She reportedly gave the boy’s father clear instructions on how to handle her puppy, which was kept in a separate room because she was not housebroken at the time. Kimberley returned home each time to find the house as she had left it. She later learned that her ex had used this quiet time in her home to stage photos and videos as he plotted his custody case against her.

In July 2007, when her son was three and a half years old, her ex-boyfriend came to pick up their son for a visit and was introduced to a male houseguest who was temporarily staying at Kimberley’s home. He threatened “if you don’t get rid of him by the time I get back, you’ll be sorry.” Three days later her ex came by, brought Kimberley a cup of coffee and offered to take their son to school. The boy never arrived at school and was instead kidnapped by his father for what Kimberley describes as an excruciating five days. Within an hour of learning that her son had been kidnapped, a Child Protective Services representative showed up at Kimberley’s door with a complaint containing nearly 80 photos and videos of the inside of her home covered in animal feces – a completely orchestrated set-up that Kimberley describes as stunning in its premeditation. She was served on the spot with a court summons challenging her for custody of their son. Kimberley later learned that her ex-boyfriend had taken their son to an Annapolis, Maryland hotel room, where his parents, who had been flown in for the occasion, were waiting. The boy was left with them and his father told him that this was his new home. He had not seen his grandparents since he was six months old.

In January 2008, Kimberley was granted full legal and physical custody of her son by the local district court judge. The boy’s father filed an appeal and paid $25,000 for a custody evaluation from a doctor that the Virginia Supreme Court had previously ruled was “atrocious and reckless.” He also convinced Kimberley’s abusive mother to testify against her, using his intimate knowledge of their troubled relationship to his advantage in court.

In July 2008, a circuit court judge stripped Kimberley of custody and granted full legal and physical custody to the boy’s father. In his ruling, the judge wrote about the father’s taking of the boy, stating that it “demonstrated not only no insight into what’s in the best interest of his child, it also showed a willingness to use his child as some leverage against her… and use of a child in that way is always wrong and makes any judge wonder about that person’s mind set and ability as a parent.” He further claimed that he believes Kimberley suffers from “stress-induced paranoia,” yet esteemed therapists familiar with her case have concluded that her response was entirely appropriate, given the kidnapping of her son and the deceitful set-up of the custody battle.

Nearly one year after her ex-boyfriend kidnapped her son, Kimberley lost custody of the boy she had raised all of his life. She now sees her son every other weekend and one night during the week.

Alabama police, with the help of DNA technology, … END_OF_DOCUMENT_TOKEN_TO_BE_REPLACED

(Murfreesboro, TN) We now have more details about … END_OF_DOCUMENT_TOKEN_TO_BE_REPLACED