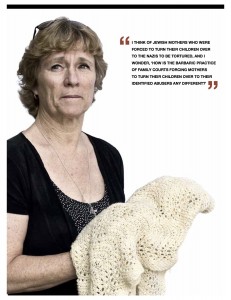 Karen is holding her son Jeff’s blanket that he used to cling to for security as a child before leaving to go on unwanted and upsetting court-ordered visits with his father. Karen lost custody of her three children three years after her divorce when a custody evaluator claimed that Karen suffered from ‘Parental Alienation Syndrome,’
or PAS, when she tried to bring up evidence of sexual abuse perpetrated by her ex-husband towards her daughters — evidence in one child of internal scarring from old healed genital wounds and a recent injury. When asked under oath in a deposition if he molested his daughters, Karen’s ex-husband refused to answer and invoked a Fifth Amendment right against self-incrimination.

The attorney appointed by the court to represent Karen’s children aligned himself with the children’s father and filed a motion to suppress all evidence of the father’s history of domestic violence and child abuse. The court granted the motion and refused to allow Karen to testify at her own custody trial. Karen later learned that this attorney had reportedly been accused by his own wife of inappropriate conduct with an 11-year-old girl. The custody evaluator who labeled Karen with PAS was later found to be “grossly negligent” by the California Board of Psychology, was fined $75,000, and had his license revoked. In a civil case that Karen later brought against the evaluator, he admitted that he had no expertise in child sexual abuse, that he never reviewed the evidence in Karen’s case, and that PAS was not a valid disorder.

The judge who switched custody of her three children to their identified abuser was disciplined by the California Commission on Judicial Performance for bias and unlawful conduct in her case. Karen’s son Jeff, after running away from his father at age 17 and returning to Karen’s custody, wrote in a declaration to the court that he had witnessed collusion between his father, his court-appointed attorney and his court-appointed therapist. He wrote that he and his sisters had been threatened by them to stop reporting abuse and to not contradict anything they said. Despite all of the evidence that has come out over time, not only has Karen not regained custody of her daughters, but her visitation with them has been reduced by the court.

Karen has reportedly caught the court red-handed in a number of other illegal activities, including falsifying court documents, engaging in unlawful ex-parte communications, soliciting her opponent to file motions against her and shredding a secret memo in her civil file. Furthermore, a judge in her case was reportedly caught lying about witness testimony in a ruling and admitting to acting without jurisdiction. Yet on every single count, the court has found a way to evade being held accountable.

Most recently, after securing a top law firm to handle a pro-bono appeal of her case, which Karen won, the local trial court is now refusing to honor the terms of the appeal, and Karen is no closer to protecting her remaining minor daughter than when she began. Despite two hundred thousand dollars of pro bono legal work being expended on her behalf, the appeals process has gotten her nowhere fast in trying to protect her minor daughter from ongoing abuse.

In the most recent trial, an independent witness testified to observing the father stroking and kissing his daughter “as if she were his lover.” Despite this testimony, and despite the fact that since the prior order was made the father has been prosecuted by the District Attorney for violating custody orders and was sentenced to jail on eight counts of contempt of court for violating additional custody orders, the court refused to return custody of her minor daughter to Karen. Instead, the court rewarded the lawbreaker with continued custody and further limited Karen’s contact with her daughter, though there were no allegations of wrongdoing on her part.

by Barry Goldstein and Veronica York Just as … END_OF_DOCUMENT_TOKEN_TO_BE_REPLACED