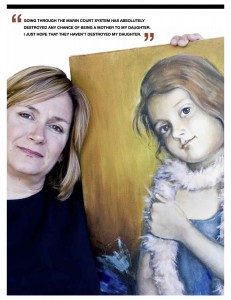 Like many women, Jonea’s marriage troubles began when she got pregnant and decided to have her child against her husband’s wishes. In the divorce that followed, Jonea believed that her ex-husband would make life very difficult if she didn’t agree to joint custody of their daughter, so she agreed to share custody.

Jonea’s daughter began suffering from a yeast infection that only got worse after overnight visits with her daughter’s father and grandfather. Shortly after the first overnight visit, Jonea took her daughter to Kaiser, where the doctors documented vaginal discharge and oral, vaginal and rectal yeast. The child was subsequently returned to Jonea with various other injuries, including a black eye and scratches on her buttocks. The child’s babysitter reported seeing what looked like a bite mark on the little girl’s thigh, and smelling a semen-like odor in her diaper.

When she was old enough to talk, Jonea’s daughter began to say things that had Jonea very concerned. One evening her daughter took a necklace out of Jonea’s jewelry box and put it up to her vagina and said “the snake goes into the hole.” On another occasion, while sitting in the bathroom before taking a bath, she began to bounce up and down on her knees. She made a tight fist as if she were holding something. When Jonea asked what she was doing bouncing, her daughter said, “I’m on his lap. I have to hold the snake until it dies.” Jonea reported these incidents to her attorney, the child’s doctor and the court-appointed custody evaluator.

The custody evaluator did a home visit at the father’s home. Jonea learned that prior to the visit, the father and the grandfather acquired a live snake to make it appear as though Jonea’s daughter had a pet snake the whole time, and that it “went into the hole“ of the aquarium in which it lived. The evaluator dismissed Jonea’s concerns and reportedly told her that “they’re just into nature, and this is basically all your imagination.” Jonea asked when the father had gotten the snake for her daughter, and the evaluator reportedly told her “two weeks ago.” Jonea then reminded the evaluator that the snake incidents had been reported more than a month earlier. At that point, the evaluator reportedly got very flustered and angry with Jonea, reiterating that it was just her imagination. The evaluator, who was ultimately paid over $30,000 by the father, issued a report stating that Jonea was a danger to her child, and that her child should be taken from her.

Jonea felt like she was at the end of her rope, unable to help her daughter. So she moved out of Marin with her child with the hope of protecting her. For three and a half years, Jonea and her daughter lived a very different life on the road. In January of 2004, Jonea was located and arrested. She went to jail pending trial for nearly five months, while the Marin authorities and family court placed the young girl with her father and grandfather without assessing the child or her safety.

In subsequent custody orders, the family court refused to consider any evidence of the injuries, yeast infections and snake incidents involving her child that had caused Jonea to flee. The family court called Jonea’s attempts to ex- plain what had happened “frivolous” and irrelevant. However, that same evidence was allowed into the criminal trial she faced for violating her custody agreement. After listening to the evidence, including the testimony of Jonea and the father, the criminal jury found Jonea innocent of all crimes with which she was charged. Nonetheless, Jonea still only gets supervised visits with her daughter, who was moved to Hawaii by the father against the mediator’s recommendation. Jonea’s efforts to obtain more time with her daughter have failed, despite sworn testimony in 2007 by the father’s girlfriend that he repeatedly beat her while Jonea’s daughter was in the home, and that Jonea’s daughter sleeps naked with her father on a regular basis.

OTTAWA - Judges will have to undergo regular … END_OF_DOCUMENT_TOKEN_TO_BE_REPLACED

Garfield Park in South Pasadena used to be a place … END_OF_DOCUMENT_TOKEN_TO_BE_REPLACED

[Calif.] The Committee to Review the Operations … END_OF_DOCUMENT_TOKEN_TO_BE_REPLACED