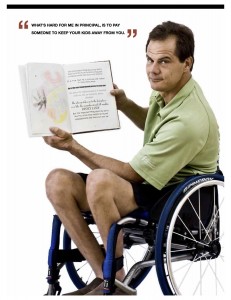 Joe was told three things after he broke his neck in a swimming accident in Hawaii that left him paralyzed from the neck down: 1) he would never walk again, 2) he would need 24-hour care for the rest of his life and 3) he would never have kids.

Well, Joe takes care of himself and has three kids that he loves, which is extra special for him because fewer than 1/2 a percent of people with spinal cord injuries are able to have kids. He had briefly known the woman who would become his wife in high school, and they reconnected when she visited him in the hospital after his accident.

Joe worked hard to become a licensed chiropractor and was deputized as a volunteer peace officer in his community. He also willingly took on the role of primary caretaker for their three children as his wife struggled with an ongoing and serious problem with prescription drugs. After supporting her through two drug rehabilitation attempts, Joe discovered that she was having an affair with their son’s teacher, and they soon filed for divorce.

Despite his ex-wife’s history as a prescription drug abuser and his history as the children’s primary caretaker, Joe was immediately hit with an “unfit father” label in court because he is in a wheelchair. Joe produced multiple testimonials from third party witnesses about his extraordinary love for and parenting abilities with his children. His children begged to spend more time with their father. Then Joe was falsely accused of being an alienator and abusing the children. Nothing came of the abuse allegations, but the alienation allegations persisted, along with the children’s continuing requests to spend more time with their father.

Joe and his family have been forced to spend hundreds of thousands of dollars trying to enable Joe to spend more time with his children. It seems that each time he goes to court, he battles multiple “professionals” involved in the case, including evaluators, therapists and his children’s attorney, all of whom are willingly paid by his ex-wife (who comes from a wealthy family), and all of whom have offices on the second floor of buildings without elevators. This means that his ex-wife can take the children to meetings at their offices, but Joe cannot, because there is no wheelchair access. None of the professionals liked it much when Joe objected to this nor when he objected to paying them.

Joe’s third-party testimonials emphasize his determination to be, and success at being, an extraordinary parent to his children. Nonetheless, the judge wrote in a recent ruling “if Joe devotes as much commitment to parenting as he has to his spinal cord injury, then he might succeed.” Now Joe is only allowed to talk with his children when he sees them for unsupervised visits every other weekend. He is not allowed to participate in his children’s lives, including school concerts, plays, sports and events. He may only attend activities that fall on his weekends with the children. The children, who have been removed by their mother from various church activities that Joe encouraged, routinely and voluntarily write about their love and admiration for their father in school and at their mother’s house. This gives Joe faith that his relationship with all three of them will survive their horrendous family court nightmare.

Alabama police, with the help of DNA technology, … END_OF_DOCUMENT_TOKEN_TO_BE_REPLACED

(Murfreesboro, TN) We now have more details about … END_OF_DOCUMENT_TOKEN_TO_BE_REPLACED