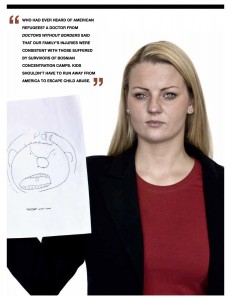 Within her first month of marriage, Jennifer’s mother Holly was beaten so severely by her new husband that she was admitted to the hospital three times. When Jennifer’s brother Zachary was just four years old, his father grabbed him and threw him against a wall multiple times, fracturing his skull. Child Protective Services told Holly that if she didn’t leave her husband and take her children with her, then she would be charged with “Failure to Protect,” so Holly separated from her husband and a custody trial began.

Holly and her children were granted an order for protection and she initially received custody of the children, but the kids were forced to go on unsupervised visits with their father. The two children came back from these visits with bruises, telling their mother that he was hurting them. They drew pictures of the abuse during court-ordered therapy, which were submitted as evidence in court. Jennifer and Zachary often hid under their beds to avoid visiting with their father, and he had to call the police to forcibly pull them out from under their beds. The children’s ongoing reluctance to visit their father and their mother’s unwillingness to place them in an abusive situation resulted in the court granting custody of the children to their father when they were seven and nine years old. Rather than protecting the children from documented abuse by their father, the family court instead blamed their mother for making the children fearful, and Holly was placed into supervised visits with them. In these visits, both children tried to discuss their father’s abuse and show their bruises, but the supervisor told them not to bring it up, and she threatened to cut off all visits with their mother if they persisted.

Finally, after realizing that the court system would not protect her children, Holly picked them up at a video store, cut and dyed their hair to disguise them, and traveled with them around the U.S. Holly eventually boarded a plane with the children to seek asylum abroad. The family was stopped in Amsterdam for inadequate travel visas. Having never seen American refugees, the Dutch authorities initially suspected that they were Bosnians pretending to be Americans, with devious hopes of being deported to America. But when they talked to the children about going back to the States, Jennifer and her brother cried and pleaded to not be sent back. When Holly and the children were examined at the Hague, the examining doctor stated that their injuries – a fractured skull, broken bones and scars – did in fact resemble the injuries of Bosnian war refugees. Yet upon confirming their story with American authorities, the family was placed in the first of three refugee camps, where they spent nearly three years before becoming the first Americans to be granted asylum by the Netherlands.

Fourteen years after fleeing with her mother and brother from their abusive life, Jennifer recently returned with her mother to Minnesota. Holly pleaded guilty to contempt of court in Hennepin County District Court in exchange for a 90-day stayed sentence and 40 hours of community service. Now an adult, Jennifer has made it her life’s work to organize and advocate on behalf of other children who have been damaged by the broken family court system. She and her brother Zachary recently created Children Against Court-Appointed Child Abuse, or CA3. Their organization is dedicated to all of the children who are still being abused and to those who did not make it out alive.

Jennifer can be reached via email at childrenunderground@hotmail.com. To learn more about Children Against Court-Appointed Child Abuse, visit their website at www.ca3cacaca.blogspot.com.

Alabama police, with the help of DNA technology, … END_OF_DOCUMENT_TOKEN_TO_BE_REPLACED

(Murfreesboro, TN) We now have more details about … END_OF_DOCUMENT_TOKEN_TO_BE_REPLACED