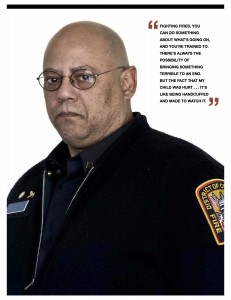 Eric and his son’s mother never married, but he willingly gave her child support, bought clothes for his son and visited him often during his first year. When the boy was around one year old, his mother began refusing to let Eric visit him. Eric was forced to file for custody because the Maryland courts won’t allow parents to file solely for visitation. The court granted him three- and four-day visits in alternating weeks.

After the boy’s mother married another man, Eric knew that something was wrong. His two-year-old son would cry, kick and scream, and try to run away when Eric returned him to his mother and stepfather’s house. It got so bad that Eric reportedly had to give him candy to get him to go back. A few months later, the boy told Eric, “he keeps beating me, Daddy . . . make him stop.” Eric called Child Protective Services (CPS), but without photos or evidence of bruises or cuts, he was told that he was required to return the child to his mother.

When the boy was nearly three years old, he disclosed to Eric that his stepfather was molesting him. Eric was dressing his son after a bath, and the boy said, “[Stepfather] kisses my penis, Daddy. I don’t want you to kiss my penis.” This time, CPS agreed to investigate, but they informed the boy’s mother first, and about three days later, Eric was charged by the boy’s mother with child abuse. The investigation found that the molestation claims were substantiated, but they couldn’t determine the perpetrator. The boy’s mother had insisted that he call his stepfather “Daddy,” which complicated the investigation. CPS and the court ordered the mother to take the boy to therapy, and the boy was eventually sent to live with his maternal grandmother.

A Guardian Ad Litum was appointed by the court to evaluate the custody situation, but Eric said he “acted more like the mother’s attorney and had an attitude.” The court then placed Eric’s son back into custody with his mother and stepfather. A few months later, the boy disclosed more physical and sexual abuse. Eric let his son tell the police about it, but they called his mother and sent him back with her. Three days later, the police followed up to investigate, but by then, the boy had changed his story. Eric later learned that the boy’s mother had threatened to beat him if he ever told anyone about the abuse. Eric was forced into court many times to urge the court to enforce its order that the mother find therapy for their son. She eventually complied, but the therapist she chose apparently informed her each time her son disclosed his abuse. After each disclosure, he was allegedly beaten by his mother and/or stepfather. His therapist never reported the disclosures to the authorities, as required by law. Needless to say, Eric’s son soon stopped talking about the abuse altogether.

Eric was forced into court to get a new therapist appointed to work with his son. After a year and a half, the therapist determined that their seven-year-old son was suicidal, and that he was vulnerable to gang violence, drug abuse and alcoholism. The therapist then blamed Eric for going to court to try to get the boy into appropriate therapy, claiming that those court appearances about therapy were a big part of the boy’s problem.

Eric faults the whole system, including the police, who repeatedly placed his son in harm’s way. Eric knows that he “can’t give him back his innocence. I can’t make him see the world the way he saw it before.” Now he sees his son every other weekend, and they have a good relationship, despite their seven-year ordeal in the family court system.

by Barry Goldstein and Veronica York Just as … END_OF_DOCUMENT_TOKEN_TO_BE_REPLACED