You are here: Home / News / How does a 10-year-old boy end up hanging to death on the family farm?

HANGING
THE MYSTERIOUS CASE OF THE BOY IN THE BARN

[…]  On Jan. 30, 1989, after dark, Joshua Sean Klaver was found in the barn’s slaughter room, hanging from a bright-orange, metal meat rail — the same one from which his father used to hang steers for butchering and pigs for scalding. A thick rope was wrapped around the boy’s neck.

At the time, authorities quickly concluded his death was a suicide and blamed a bitter custody battle between Josh’s unmarried parents.

But for nearly three decades, an inexorable stream of questions, revelations and lingering doubts has pulled investigators back again and again to poke through the file long-shelved in a room on the sixth floor of the county building reserved for cold cases. [Read Full Story] 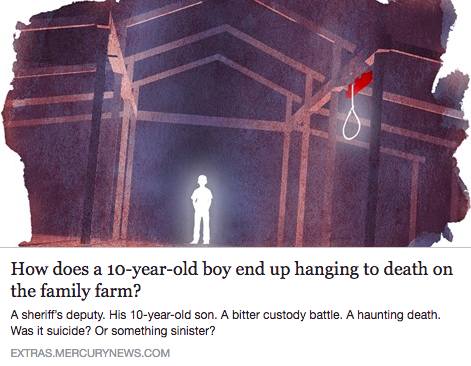 Alabama police, with the help of DNA technology, … END_OF_DOCUMENT_TOKEN_TO_BE_REPLACED

(Murfreesboro, TN) We now have more details about … END_OF_DOCUMENT_TOKEN_TO_BE_REPLACED