You are here: Home / News / Taken from mom, teen flees dad and waits for 18th birthday

Hannah Mills was 15 when two strangers woke her in a hotel room. One waved handcuffs in her face while taunting her: “We’re not afraid to use them on children.”

The two strangers, who had taken Hannah from a Shiawassee County courtroom to the motel, then drove her to the Detroit airport where they held a towel over her head and escorted her to an airplane.

Hours later, she landed in California where she joined her father and younger brother at a reunification program – called Family Bridges – designed to repair Hannah’s relationship with a father she says she hated, but who was given sole custody of her after a bitter custody battle with her mother. [Read Full Article] 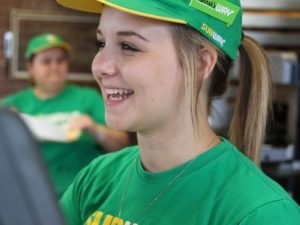 Hannah Mills says she found a job with Subway to support herself after leaving her father’s home. The 17-year-old teen was court-ordered to live with her estranged father, who forced her to attend a California reunification program because he felt Hannah’s mother had alienated her from him.
(Photo: Lisa Roose-Church/Livingston Daily)

A few weeks before she was killed, Vera Kisliak … END_OF_DOCUMENT_TOKEN_TO_BE_REPLACED