You are here: Home / News / A divorced dad, estranged kids and a controversial plan to bring them together 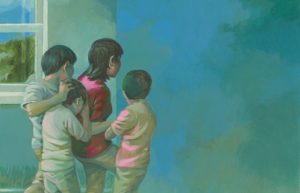 Laura Jeu knew something was wrong when her mother, Sharon, returned from a custody hearing in late November 2011. Sharon Jeu simply told her four children to get ready to go see their father. But the look in her mother’s eyes signaled to Laura, then 16, that this wouldn’t be a typical visitation exchange in her parents’ six-year custody battle.

“I could tell she had been crying,” recalled Laura, a petite, dark-haired 22-year-old. As she recounted the story, she picked the frayed edge of her plaid shirt. “I knew something out of the ordinary had happened. There was no way I was getting in that car.”

What Laura didn’t know was that Loudoun County (Va.) Circuit Court Judge Burke McCahill had just granted her father, Raphael, temporary custody of the children so he could take them to a four-day workshop in California to repair their relationship. The judge ordered Sharon to bring the children from her home in Pennsylvania to their therapist’s office in Virginia without telling them where they were ultimately going, according to the interim custody order. If Sharon couldn’t get them to comply, McCahill warned, a warrant would be issued for her arrest. [Read Full Article]

A seven-year-old boy has died after being … END_OF_DOCUMENT_TOKEN_TO_BE_REPLACED

Alabama police, with the help of DNA technology, … END_OF_DOCUMENT_TOKEN_TO_BE_REPLACED

(Murfreesboro, TN) We now have more details about … END_OF_DOCUMENT_TOKEN_TO_BE_REPLACED