FAIRFIELD — A somber crowd of as many as 30 mothers gathered in protest Wednesday  in front of the Solano courthouse.

The mothers, many of them affiliated with four area advocacy groups, want to see a change in how Solano County’s four family law judges treat some mothers in contentious child custody disputes.

Several of the mothers say the judges have deprived them of time with their children or lost custody entirely because the jurists adhere to beliefs embodied in a disorder first identified in the 1980s that the women believe has been debunked. [Read Full Article] 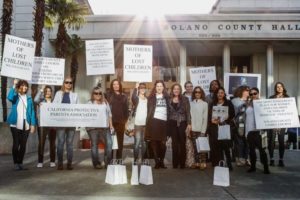 A few weeks before she was killed, Vera Kisliak … END_OF_DOCUMENT_TOKEN_TO_BE_REPLACED