You are here: Home / News / California’s family court system places kids back in the hands of alleged abusers

Profiteering judges, lax oversight and sexism have set up a cottage industry that works against poor parents

The toddler could barely walk, but already he was lost. 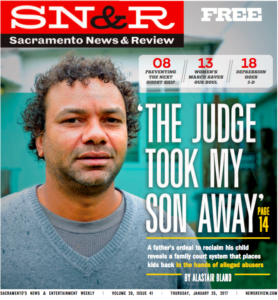 In 1992, his mother, a woman named Josie Cohen, reported to Sacramento area authorities that she suspected her estranged husband was sexually abusing the 2-year-old.

But Judge Peter McBrien—still with the court today—was convinced the boy had been coached by his mother to concoct the allegations and handed him over to his father for primary custody. The reports of abuse continued. In July 1995, the child called the police himself, asking for protection from his dad. [Read Full Article]

A seven-year-old boy has died after being … END_OF_DOCUMENT_TOKEN_TO_BE_REPLACED

Alabama police, with the help of DNA technology, … END_OF_DOCUMENT_TOKEN_TO_BE_REPLACED

(Murfreesboro, TN) We now have more details about … END_OF_DOCUMENT_TOKEN_TO_BE_REPLACED