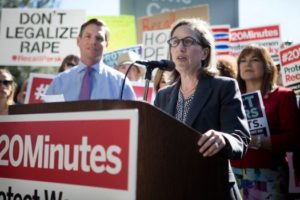 Recall campaign chair, Michele Dauber, addresses the media as recall supporters hold a rally near the Santa Clara County Hall of Justice in San Jose, Calif., Friday, Sept. 2, 2016. The rally was held to whip up support for ousting Judge Aaron Persky via a 2017 special recall election. Perks presided over the Brock Turner case which became a lightning rod for criticism after Brock received a sentence for sexual assault that many have deemed too lenient. (Patrick Tehan/Bay Area News Group)

The state Commission on Judicial Performance has spoken, rejecting the notion that the Santa Clara County judge who sentenced former Stanford swimmer Brock Turner to six months in jail for sexually assaulting an unconscious, intoxicated woman engaged in judicial misconduct.

But the Stanford law professor leading the movement to recall Superior Court Judge Aaron Persky has fired back with a scathing critique.

In her seven-page analysis, Professor Michele Dauber contends that the commission decided Persky had not exhibited bias in former Turner’s case or in four other cases based on erroneous information. For instance, she said, the commission said the judge was following the probation recommendation in some cases in which there was no full probation report. [Read Full Article]

A seven-year-old boy has died after being … END_OF_DOCUMENT_TOKEN_TO_BE_REPLACED

Alabama police, with the help of DNA technology, … END_OF_DOCUMENT_TOKEN_TO_BE_REPLACED

(Murfreesboro, TN) We now have more details about … END_OF_DOCUMENT_TOKEN_TO_BE_REPLACED