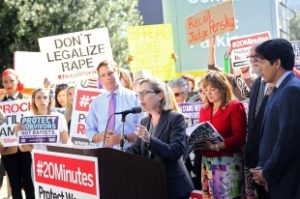 Michele Dauber, Stanford law professor and chair of the Recall Persky campaign, speaks during a rally in downtown San Jose following the Sept. 2, 2016, release of Brock Turner, who served half of his six-month sentence. Photo by Veronica Weber.

The campaign working to unseat Santa Clara County Judge Aaron Persky, sparked by his sentencing of former Stanford University student Brock Turner to six months in county jail, released this weekend a detailed statement criticizing a state judicial commission that recently cleared him of any misconduct.

The seven-page response calls the Commission on Judicial Performance’s December report — which found Persky did not abuse his authority nor exhibit bias in sentencing Turner last summer nor in other cases that have been cited by the recall campaign as evidence of his bias — flawed, inaccurate and “nontransparent.”

“This was a one-sided, closed-door proceeding that resulted in an error-ridden report … by an agency with a long history of protecting judges,” the response states. [Read Full Article]

A seven-year-old boy has died after being … END_OF_DOCUMENT_TOKEN_TO_BE_REPLACED

Alabama police, with the help of DNA technology, … END_OF_DOCUMENT_TOKEN_TO_BE_REPLACED

(Murfreesboro, TN) We now have more details about … END_OF_DOCUMENT_TOKEN_TO_BE_REPLACED