You are here: Home / News / Abused kids die as authorities fail to protect 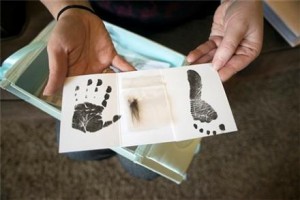 Jennifer Blaz, 34, holds the small hand print, hair clipping and footprint given to her by the hospital after her daughter Mattisyn Blaz’s death in 2013. Her husband, Matthew Blaz, was convicted of killing her daughter. / AP photo

BUTTE, Montana (AP) — At least 786 children died of abuse or neglect in the U.S. in a six-year span in plain view of child protection authorities — many of them beaten, starved or left alone to drown while agencies had good reason to know they were in danger, The Associated Press has found.

To determine that number, the AP canvassed the 50 states, the District of Columbia and all branches of the military — circumventing a system that does a terrible job of accounting for child deaths. Many states struggled to provide numbers. Secrecy often prevailed.

Most of the 786 children whose cases were compiled by the AP were under the age of 4. They lost their lives even as authorities were investigating their families or providing some form of protective services because of previous instances of neglect, violence or other troubles in the home.

A seven-year-old boy has died after being … END_OF_DOCUMENT_TOKEN_TO_BE_REPLACED

Alabama police, with the help of DNA technology, … END_OF_DOCUMENT_TOKEN_TO_BE_REPLACED

(Murfreesboro, TN) We now have more details about … END_OF_DOCUMENT_TOKEN_TO_BE_REPLACED