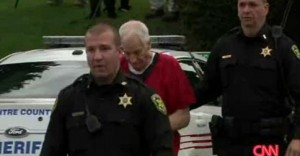 NEW YORK (CNN) – Dozens of state officials in Pennsylvania, many who worked to bring down infamous child molester Jerry Sandusky, have been caught exchanging crude pornographic e-mails written on state e-mail accounts, state computers, and on state time, according to the state’s attorney general.

In all, more than four thousand sexually explicit e-mails were circulated between about 50 people, many state employees, over a four-year period starting in 2008. Some of them at the very same time that the very same people were building a child sex abuse case against Sandusky. [Read Full Article]

Alabama police, with the help of DNA technology, … END_OF_DOCUMENT_TOKEN_TO_BE_REPLACED

(Murfreesboro, TN) We now have more details about … END_OF_DOCUMENT_TOKEN_TO_BE_REPLACED