Marin County Bar Association (MCBA) President Elizabeth Brekhus was both careless and dishonest in official testimony before the California Judicial Council on October 27th. Brekhus appears to have flat out lied to the Council when she stated that “three different independent investigations, reviews and audits have all claimed that their (CJE’s) complaints of judicial misconduct, cronyism, waste of public funds, avoritism and bias are all unfounded and baseless allegations.”

The fact is, the Marin Family Court has never been reviewed for judicial misconduct, cronyism, favoritism or bias (to our knowledge) because the Marin Superior Court, the California Judicial Council and their legal cronies have religiously lobbied to exclude these very topics from every formal investigation that has been done in Marin County (hmm, anybody wonder why?).

We’d like to draw Mrs. Brekhus’ attention to the February 2002 National Center for State Courts Operational Review of the Superior Court of California County of Marin Family Law Division which states on Page One, “It is important to note that determining the existence of individual judicial bias was beyond the scope of this operationally focused review.”

Mrs. Brekhus misstates the results of these investigations in an attempt to discredit the important work that CJE and our allies do to protect domestic violence victims and abused children in the courts, work which is validated and borne out by the Official State Audit of the Marin and Sacramento Family Courts. When Marin family court mediators cannot prove that they’ve received even the most basic training in domestic violence and child abuse, it doesn’t take a rocket scientist to recognize that abused kids are gonna get hurt by untrained employees who cannot detect dangerous parents and therefore force kids to visit unsupervised and live with them.
Check out family law attorney Barbara Kauffman’s letter to MCBA President Brekhus: 11/1/2014 Letter to MCBA President/Ross Mayor Elizabeth Brekhus (PDF)

Brekhus was part of an entourage of four Marin attorneys who apparently didn’t understand that the 26 different public comments made to the Judicial Council that day were from litigants from all over California, from San Diego to Siskiyou counties. Their defense of the Marin County Family Court seemed oddly out of place given the echoes of similar child safety concerns from nearly a dozen other counties. 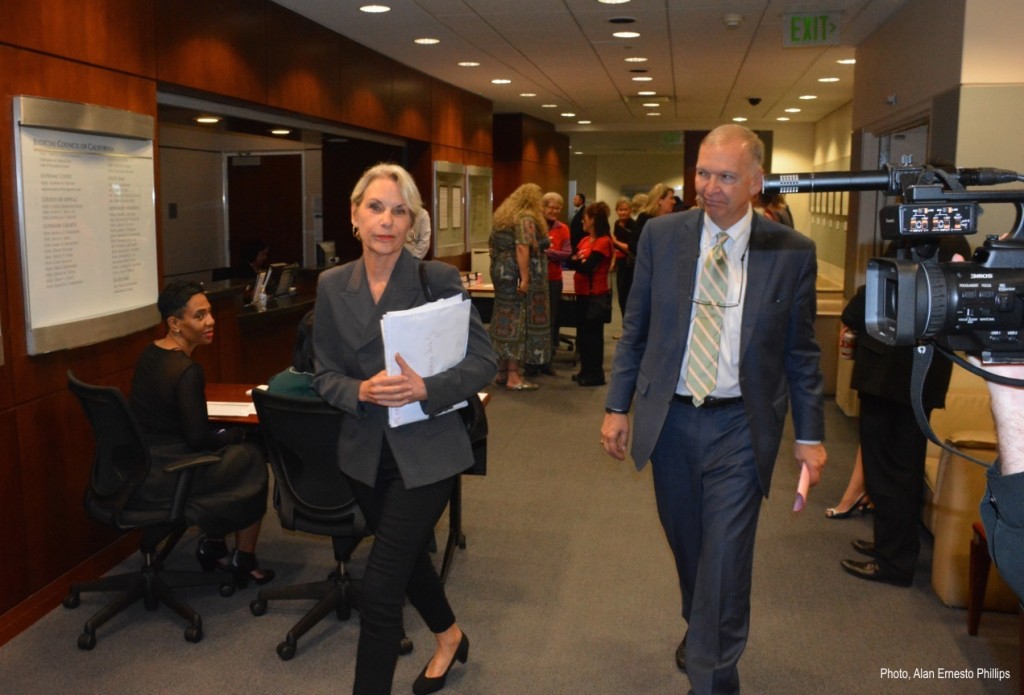 Neil Moran from the Freitas McCarthy Law Firm was seen in the hallway outside of the October 27th California Judicial Council meeting, pictured here with Marin attorney Barbara Monty, after she spoke to the Judicial Council in an attempt to defend the Marin Family Court.

Alabama police, with the help of DNA technology, … END_OF_DOCUMENT_TOKEN_TO_BE_REPLACED

(Murfreesboro, TN) We now have more details about … END_OF_DOCUMENT_TOKEN_TO_BE_REPLACED