BATTERED, BEREAVED, AND BEHIND BARS

Arlena Lindley’s boyfriend Alonzo Turner beat her for months and murdered her child — so why was she sent to prison for 45 years? A BuzzFeed News Investigation. 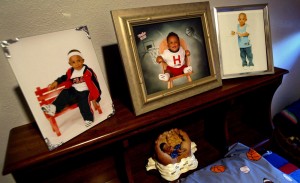 Photographs of Titches Lindley sitting above his bed at the home of his father, William Wade, in Dallas. Photograph by Melanie Buford for The Dallas Morning News

The first thing Latricia Chance saw when she walked up to the apartment that October morning was a toddler, alone and shoeless, eating cereal on the doorstep. It was her friend Arlena Lindley’s 3-year-old son, Titches. Chance said hello. Titches, his mouth full of food,said nothing.

Inside, she greeted Lindley and her boyfriend, Alonzo Turner. Chance knew the couple had gone through trouble in the past, and something seemed off between them now — it just wasn’t clear what. Then Turner stepped outside and dragged Titches into the living room. Titches had soiled his light-blue pajama pants.

Turner, a 6-foot-2-inch, 220-pound factory worker, ordered the toddler to bend over and touch his toes. He whipped him with a thick leather belt, then threw him against the wall. Titches hit his head so hard that he spat out some of his breakfast. Turner took Titches by his neck and wiped his face in the half-eaten cereal. With Titches on his back and crying, Turner pressed his foot to the boy’s chest. Then he picked him up, dragged him to the bathroom, pushed his face into the toilet, and flushed. [Read Full Article]

A seven-year-old boy has died after being … END_OF_DOCUMENT_TOKEN_TO_BE_REPLACED

Alabama police, with the help of DNA technology, … END_OF_DOCUMENT_TOKEN_TO_BE_REPLACED

(Murfreesboro, TN) We now have more details about … END_OF_DOCUMENT_TOKEN_TO_BE_REPLACED