You are here: Home / News / NH: Judge trying to REDUCE sentence for molester who assaulted girl, 7 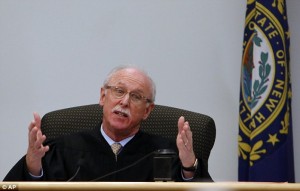 Change of heart: Carroll County Judge David Garfunkel has come in for intense criticism after announcing his plan to shorten the prison sentence for a convicted child molester

A New Hampshire judge has caused fury in a small New Hampshire town after announcing that he plans to reduce the sentence of child molester who was convicted of sexually assaulting a seven-year-old girl to just five years.

Carroll County Judge David Garfunkel initially ordered Joshua Baud, 31, sentenced to 10 to 20 years – with a minimum of seven and a half years behind bars. He announced on September 30 that he had a change of heart and wanted to cut the sentence to just five years.

OTTAWA - Judges will have to undergo regular … END_OF_DOCUMENT_TOKEN_TO_BE_REPLACED

Garfield Park in South Pasadena used to be a place … END_OF_DOCUMENT_TOKEN_TO_BE_REPLACED

[Calif.] The Committee to Review the Operations … END_OF_DOCUMENT_TOKEN_TO_BE_REPLACED