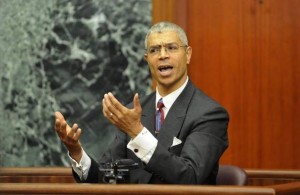 Judge Wade McCree testifies at his misconduct hearing. He was removed from the bench. A former defendant sued the judge and his lawyer wants to take the case to the Supreme Court. / Detroit Free Press

DETROIT — Wade McCree Jr. lost his job, but he won’t lose his shirt.

The disgraced judge — who once texted a shirtless photo of himself to a female court bailiff — had an affair with a woman while overseeing her child custody case, had sex with her in his chambers and sexted her from the bench.

But he can’t be sued for money damages over any of that because judges are immune from civil lawsuits — a well-established doctrine that has many in the legal profession demanding change, arguing the McCree case highlights a pervasive problem in the justice system: judges getting away with bad behavior on immunity grounds.  [Read Full Article]

OTTAWA - Judges will have to undergo regular … END_OF_DOCUMENT_TOKEN_TO_BE_REPLACED

Garfield Park in South Pasadena used to be a place … END_OF_DOCUMENT_TOKEN_TO_BE_REPLACED

[Calif.] The Committee to Review the Operations … END_OF_DOCUMENT_TOKEN_TO_BE_REPLACED