You are here: Home / News / Saying that a killer ‘snapped’ is not an explanation for domestic violence 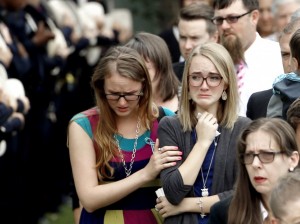 Cassidy Stay, center, is comforted after a funeral service last week for her parents and three siblings, who were shot to death allegedly by Ronald Lee Haskell. (AP Photo/David J. Phillip)

When Ronald Lee Haskell was accused of killing six members of his ex-wife’s family in Texas this month, I wondered how long it would take for a news report to suggest that the suspect had “snapped.” The scope and horror of the crime — the victims included four children ages 4 to 14 — meant it took a little while for this media narrative to show up. But there it was, two days later, familiar from innumerable stories of domestic violence that end in murder. An Alaska TV station gathered the observations of childhood friends, who described the youthful Haskell as funny, compassionate and religiously devout, then cited one friend’s observation that “Haskell must have snapped.” The reporter let the description hang there, and closed the piece, as if a single verb said it all. Rarely does a single word attempt to explain so much and fail so completely. [Read Full Article]