You are here: Home / News / CA: Will Complaint About Judge’s Evidence Tampering Lead to Criminal Indictment? It Should. 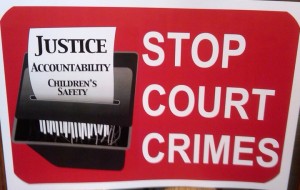 Marin County, California has served as “Ground Zero” in the ongoing fight against judicial corruption, thanks to decades of public outcry, FBI investigations, judicial recall attempts, state and outside audits, and privately commissioned reports about the serious harm that the courts are causing in residents’ lives.

The Marin Courts have engaged in questionable behavior for as long as anyone can remember. The 2006 arrest of Marin’s top court official John Montgomery on felony conflict of interest charges barely raised an eyebrow. A 2009 shredding party orchestrated by current Marin Court Executive Kim Turner, which delayed an official state audit of the Marin Family Court by more than six months, was justified in a report from the Administrative Office of the Courts (AOC), the staff arm of the California Judicial Council, despite a public protest and a call for a criminal investigation into the evidence destruction. [Read Full Article]

Alabama police, with the help of DNA technology, … END_OF_DOCUMENT_TOKEN_TO_BE_REPLACED

(Murfreesboro, TN) We now have more details about … END_OF_DOCUMENT_TOKEN_TO_BE_REPLACED