You are here: Home / News / FL: Here Comes the Judge, in Cuffs

In Broward County, Fla., Spate of Judges in D.U.I. Arrests 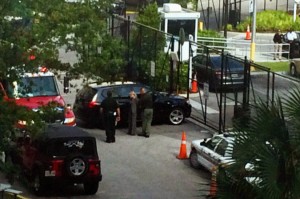 MIAMI — Lawyers gawked from office windows last month when a BMW S.U.V. swiped a parked police cruiser in the parking lot of a courthouse in Fort Lauderdale, then slammed into a gate over and over again.

A judge was at the wheel.

As lawyers used smartphones to snap pictures of the morning spectacle, Judge Lynn D. Rosenthal became the third Broward County judge in six months to be arrested on charges of driving under the influence. A colleague, Judge Gisele Pollack, had been suspended five days earlier after getting arrested on a D.U.I. charge while already on leave for taking the bench intoxicated — twice.

Even for South Florida, where absurd news events are routine and the sheriff went to prison for corruption, the spate of judicial scandals has raised serious questions about whether the arrests in Broward are a bizarre coincidence or underscore a larger systemic problem. [Read Full Article]

Alabama police, with the help of DNA technology, … END_OF_DOCUMENT_TOKEN_TO_BE_REPLACED

(Murfreesboro, TN) We now have more details about … END_OF_DOCUMENT_TOKEN_TO_BE_REPLACED