You are here: Home / News / 1 in 8 Children Will Be Maltreated, Study Says 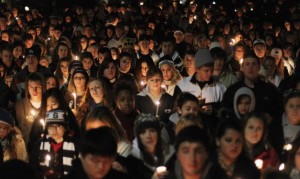 Penn State students and supporters hold a vigil for victims of child abuse in November 2011. Nearly 1 in 8 children will experience child maltreatment in their lifetime, a new study finds. Source: U.S. News

The numbers are even higher for African-American and Native American children.

The number of children who experience a confirmed case of maltreatment in their lifetime could be much higher than previous estimates, according to a new study released by Yale University on Monday.

Maltreatment – which can come in the form of neglect or physical, sexual or emotional abuse – is also known to have negative physical and mental health outcomes for children, including improper brain development, lower language development and impaired cognitive abilities.

Still, the actual number of child maltreatment incidents is likely much higher, says Christopher Wildeman, an associate professor of sociology at Yale. The 12.5 percent estimate he and his colleagues determined is “the absolute floor,” he says, because confirming maltreatment cases is such a complicated process.

“The bar for getting to the point that you have a confirmed maltreatment case is very, very high,” Wildeman says. “The fact that 12.5 percent is actually a drastic underestimate is pretty concerning.”

In order for a case to be confirmed, Wildeman says someone must first report suspected maltreatment to Child Protective Services, which then must determine if the information is “sufficiently credible” to launch an investigation. At that point, CPS would also have to find sufficient evidence that maltreatment did in fact occur.

Previous research, which has examined the incidence of child abuse and neglect on a yearly basis, puts the rate at about 1 in 100 children. But because Wildeman’s study looked at the cumulative rate over the course of an entire childhood, the numbers are much larger.

Wildeman and his colleagues estimated the prevalence of confirmed childhood maltreatment by looking at the National Child Abuse and Neglect Data System Child File – a federally-funded project housed at Cornell University that tracks data related to child abuse and neglect – for the years 2004 to 2011. Those data showed nearly 5.7 million children during that time had experienced maltreatment. Of those cases, between 70 and 75 percent involved neglect, Wildeman says.

According to the Centers for Disease Control and Prevention, child maltreatment can have long-lasting effects, both for the individuals affected and for society as a whole. The lifetime economic cost resulting from new cases of child maltreatment – including costs for childhood health care, adult medical costs, productivity losses, criminal justice costs and special education costs – is about $124 billion, the CDC reports.

“Basically if you list the negative outcomes someone could have in childhood, adolescence, early adulthood or further down the road, we have pretty good evidence child maltreatment does it,” Wildeman says.

Programs that have nurses visit newborns and their parents over a period of time – not to exert social control, but to give practical advice to parents – could help ease some of the stress of parenting, Wildeman says.

“Having little kids is incredibly overwhelming,” Wildeman says. “These sorts of programs that could try to alleviate some of that tension folks are facing could be really helpful.” [View Original Article…]

OTTAWA - Judges will have to undergo regular … END_OF_DOCUMENT_TOKEN_TO_BE_REPLACED

Garfield Park in South Pasadena used to be a place … END_OF_DOCUMENT_TOKEN_TO_BE_REPLACED

[Calif.] The Committee to Review the Operations … END_OF_DOCUMENT_TOKEN_TO_BE_REPLACED