You are here: Home / News / Wife of Outspoken Dead Judge Weighs in on Depressing Saga of Woody Allen, and Mia and Dylan Farrow

March 6, 2014 – As an attorney with over three decades of experience advocating for women and children whose lives have been blighted, some by domestic violence and some by childhood sexual abuse, and as the widow of Elliott Wilk, the judge in the Allen v. Farrow custody case, my interest in Dylan Farrow’s recent disclosures of sexual abuse by Woody Allen is both professional and personal. 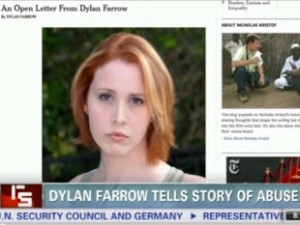 Because of Allen’s celebrity, I fear that his deceptive words of denial will reverberate in a way that further silences mothers of child abuse victims, as well as adult survivors, who would otherwise seek justice in our courts. This is one of the reasons his reliance on a flawed forensic report and the testimony of other mental health practitioners, lacking expertise about sexual abuse, is so troubling. [Read More…]

Alabama police, with the help of DNA technology, … END_OF_DOCUMENT_TOKEN_TO_BE_REPLACED

(Murfreesboro, TN) We now have more details about … END_OF_DOCUMENT_TOKEN_TO_BE_REPLACED