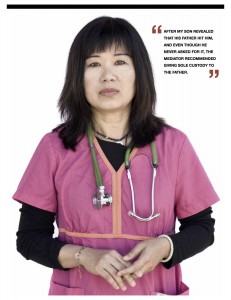 Yupa, an educated Thai native, came to the United States with an immigrant’s dream of a better life. She was hired by an American man who needed someone to help him grow his orchid business. She did just that, and they eventually married.

After Yupa got pregnant, her ex-husband demanded that she abort the child, and she reports that when she refused, he became verbally, physically and financially abusive toward her. He refused to pay for her medical expenses, and when she was 7 months pregnant, he demanded that she return to Thailand to give birth. Several months after the child was born, the father went to Thailand and asked for Yupa’s help buying orchids there. Like so many domestic violence survivors, she returned to him and the United States after promises that he would change. Instead, her immigrant dream became a nightmare.

Yupa continued to suffer abuse, and she and her husband separated in 1999 after he was arrested for domestic violence. She obtained a three-year restraining order, but the court granted the father unsupervised visits with the boy. The child returned from one visit with what appeared to be a chemical burn on his penis. His pediatrician reported this to Child Protective Services (CPS). CPS investigated and closed the case as inconclusive. Yupa still does not know how that injury happened. The visitations continued and the father sent the boy to school or back to Yupa in outgrown, torn or cut clothing and shoes; with untreated allergy attacks: a swollen face and eyes, skin outbreaks; with poor hygiene; telling stories about the graphic pornography he had seen at his father‘s home; and with unexplained bruises. The child told the Marin court mediator that his father hit him. In late 2006, the child reported to the police that his father told him his mother was going to “die” or “be killed.”

Yupa tells people that the Marin Family Court abducted her child in September 2007. That’s when Yupa lost all custody of her only son to her ex-husband based on a custody recommendation by the Marin family court mediator. The recommendation came just a week or two after Yupa filed motions to have the court mediator and court-appointed child’s attorney removed from the case for failing to follow state-mandated procedures. This also occurred right after the mediator and child‘s counsel conferred privately about her case, in violation of state law. The mediator recommended that the child be taken from Yupa (in whose care the child had thrived) without reading the court custody and domestic violence files as required by state law; and without contacting the boy’s doctors, therapists or teachers.

The judge denied Yupa’s repeated requests for a law-abiding mediator and with the support of the child’s attorney (who billed the parents $60,000 over a three year period, during which he met with the child for a total of three hours), she stripped Yupa of all custody, allowing her just two hours of supervised visits per week. Her ex-husband often cancels the visits, so Yupa now sometimes goes weeks without seeing her son.

My Mom & Dad
My Mom’s eyes are like a firestorm going to happen.
My Dad swims like a shark coming after its prey.
My Mom’s voice sounds like an orchestra except for its very high notes.
Her smile can light up anybody’s mood.
Her eyes are like diamonds.
Her imagination is like a safe full of precious treasures and thoughts.
Her love is a field of things that can only be loved. And her personality is like love.

A seven-year-old boy has died after being … END_OF_DOCUMENT_TOKEN_TO_BE_REPLACED

Alabama police, with the help of DNA technology, … END_OF_DOCUMENT_TOKEN_TO_BE_REPLACED

(Murfreesboro, TN) We now have more details about … END_OF_DOCUMENT_TOKEN_TO_BE_REPLACED