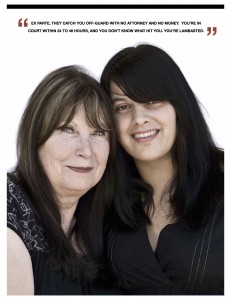 Susan was in a physically abusive marriage with her husband, a well-connected county firefighter, for 30 years. She filed for a divorce and a restraining order against him when her daughter Sarah was six and a half years old. Within months, young Sarah’s court-appointed attorney, social worker and special master were working in concert to try to coerce her into believing that her mother was crazy and taking drugs. Her mother was charged with Parental Alienation Syndrome (PAS) for suggesting that she was a victim of domestic violence.

When Sarah was nine years old, Susan was called into court for an ex parte hearing supposedly related to a minor change in their visitation exchange sites. As she waited outside the courtroom, her ex walked up and told her, “As of today, you no longer have a daughter.” Her ex’s attorney told the judge that because she’s a parental alienator and because she’s crazy, they would be taking her daughter from her that very day. They requested and received a four-year CLETS restraining order against Susan, falsely claiming that she had a gun and would shoot them all that day. This order severely restricted her contact with her daughter, and the court then placed Sarah in the sole custody of her physically abusive father.

The court ordered Susan to pay child support AND she received no alimony from her abusive ex-husband for more than ten years. Her ex-husband’s attorney also advised her to go into early retirement, and her ex-husband ended up with half of her life savings as a ‘wage assignment’ to cover child support, making her homeless and destitute.

Sarah’s father reportedly told her that she would not be seeing her mother again, and Sarah felt that he expected her to easily adjust to this. She said that it was extremely hard on her to be denied regular contact with her mother. Even when she was supposed to have court-ordered supervised visits with her mother, her father would often not bring her. No one would tell Susan that she wasn’t coming, so her mother often waited for an hour to visit with Sarah, when everyone knew that her ex-husband never intended to bring her. Susan compared the treatment she received from supervisors during these visits to that of Nazis. She was often pulled into the hallway and threatened that if she answered her daughter’s questions in a certain way, then she would lose all future visits. She and her daughter were often punished by supervisors sitting behind plexiglass windows who laughed at and mocked them and arbitrarily cancelled their visits. To help compensate for missed visits, Sarah often snuck in phone calls to her mother whenever she could and begged to see her.

Sarah ran away from her father’s house on five separate occasions between the ages of 12 and 16, and she quickly came to mistrust the police. On one occasion, she fled her father’s house with a child advocate and attempted to secure help from police outside of San Mateo County, telling them that her father was beating her. The police drove her straight back to San Mateo, where the local police dismissed the child advocate and kept Sarah at the station all night, interrogating her from 9pm that night until 5am the next morning. They refused to let her sleep or eat, and they would not let her go until she falsely implicated her mother as somehow responsible for her running away. When her father came to pick her up at 5am, he yelled at her in front of the police, yet no one intervened to help her.

In 2001, a warrant was issued for Susan’s arrest for meeting with her daughter outside of the court-ordered custody arrangements. Susan posted bail of $7,500 and awaited trial. The District Attorney told her that she would be going to jail for two years, but she decided against a plea bargain and instead took her chances on a jury trial. On the day of her court appearance, the District Attorney dropped the charges against her when it became clear that Susan’s daughter Sarah was willing to take the stand. In 2004, another warrant was issued for Susan’s arrest, and she remained a fugitive for more than three years until her daughter turned 18.

Susan and Sarah are now happily living together again, and they are slowly piecing their lives together. Sarah’s advice to other kids in her situation is to “never, ever give up.”

A seven-year-old boy has died after being … END_OF_DOCUMENT_TOKEN_TO_BE_REPLACED

Alabama police, with the help of DNA technology, … END_OF_DOCUMENT_TOKEN_TO_BE_REPLACED

(Murfreesboro, TN) We now have more details about … END_OF_DOCUMENT_TOKEN_TO_BE_REPLACED